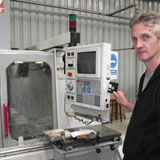 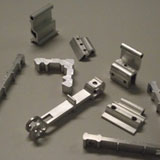 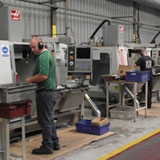 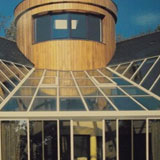 CNC code loaded into Haas mills on old-style 3½” floppy disks, and into Kryles through a laptop connected via an RS232 cable, demonstrates ALPHACAM’s versatility in creating programs for all types of cutting machine.

And ALPHACAM’s simulation feature has saved Irish window system company Reynaers Aluminium thousands of Euro in repairs, by warning of collisions.  CNC programmer Tom Kelly (pictured right, loading a floppy) says collisions can be very costly. “One crash can cost thousands of Euro as we’d need to repair or replace the machine head and tooling – then, of course, the machine’s out of action while it’s being repaired, so it’s not just the repair costs; we’d lose money because of delayed production.

“Sometimes, when I’ve made up a new jig there are clip joints on it where bolts may be sticking up or holding the jig to the machine table, and the cover comes quite close. But the simulation shows instantly if there’ll be a collision. The feature has definitely prevented a few crashes.”

Reynaers have plants all over the world. Their Southern Ireland division, based in Enniscorthy, County Wexford, produces hinges and other components that form part of the complete window system. Made exclusively of aluminium, they are shipped to Reynaers’ head office in Belgium where they are warehoused before being forwarded to window fabricators throughout Europe for on-site installation.

All their products go through ALPHACAM programs, post processed to three Haas and two Kryle vertical mills. Because the Haas machines have built-in floppy disk drives, Tom Kelly still uses old-style 3½ floppy disks to load the CNC code. “We could use an RS232 cable, but the disks were being utilised when I came here 5½ years ago, and because the system works well there’s no need to change it. I simply put the program on a floppy and hand it to the operator when he comes into my office.” However, code is fed into the Kryle mills via the laptop being taken on to the shopfloor and connected directly to the machine with an RS232 cable (pictured left).

With mills from two different manufacturers, he says ALPHACAM’s capability of programming any machine brand is of the utmost importance. “When the code’s been produced I just go into the post processor and select either Haas or Kryle. There’s no complication – it just outputs the right program for the right machine.”

Using ALPHACAM as both his CAD and CAM systems, his first step is to draw the part and save it as an individual drawing. “Then I do a program drawing with the part in a vice or jig. After that I put the tooling on and set the toolpaths – for example if it’s a simple part where we’re just drilling and tapping some holes I’ll use the 6mm spot drill and 5mm drill, then 6mm tap and 11mm drill. Finally I set the materials for the solid simulation and simulate the piece being machined. When I know that everything’s right, we can start the actual machining.”

He says programming is the quickest part of the operation. “It’s the drawings that take longer – while some can be done in under an hour others can take a whole day depending on the complexity of the part. But once the drawing’s finished, putting the tooling on and generating the toolpaths doesn’t take long with ALPHACAM.

Replacing a programmer who could only work online meaning there was a considerable amount of machine downtime, Tom Kelly was brought in by Reynaers 5½ years ago. Reynaers’ other programmer was using ALPHACAM, and quickly taught him the basics. “Management wanted the machines to be kept running all the time, and that’s what I was taken on to achieve. Now production continues while I’m working on the programming. It’s my job to ensure the programs are ready for the machines, and thanks to ALPHACAM, they always are.”

Also when he joined Reynaers, all jobs were being held in vices, and they were looking for someone to make jigs. “I create all the programs for jigs through ALPHACAM, as well as doing the original drawings in ALPHACAM’s CAD section.

“ALPHACAM is absolutely crucial to our whole manufacturing process. If I came in one morning and it had gone we’d be totally lost. For example, we’re doing programs that might have 70 or 80 small parts on a jig, and if we had to type each one in individually it would take all day. But with ALPHACAM, if I have to put down a drill I select all the holes in one go, and it automatically does the rest.”