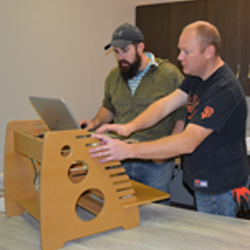 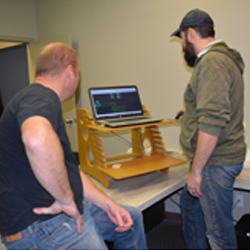 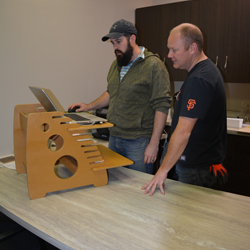 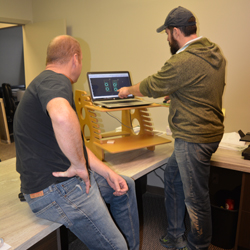 Best of Both Worlds

Joel Leenheer fields calls from behind his desk at Metric Interiors, where any minute he may be called to the shop to roll up his sleeves and get down to business of another variety.

On the commercial side, the company’s projects have included doctors’ offices, exam rooms, physical therapy clinics, cafés, pharmacies, and the latest in trendy business offices.

Because Leenheer is an experienced woodworker, his duties also include the oversight of the day-to-day activities of the shop. “I know how to do these things physically with my hands and end up doing some of the more complicated aspects of the job myself,” he says.

Leenheer got his first taste of cabinetry work at the age of 17, when he began a job in construction. “It was kind of one of those things I fell into, but I found it was something I really enjoyed,” he says. “I always wanted to own a business, even though I didn’t always know what kind of business.”

Today, Leenheer and his partner employ a team of five, including three shop staff, a designer, and a salesperson for the company’s residential showroom.

To ensure that the business would hit the ground running, the partners acquired the ALPHACAM computer-aided-manufacturing (CAM) solution, by Vero Software, before the business had opened its doors.

“What I like about ALPHACAM is that I’m able to price a job based on what I can do with the software,” he says. “ALPHACAM is, quite simply, a time saver. When I price a job, I say, ‘I can make 400 of these desks very quickly with ALPHACAM.’ That helps me price the job accurately.”

Leenheer was first exposed to ALPHACAM prior to founding Metric Interiors, while still an employee at a different millwork company. Though he was hired for other duties, he ultimately became a CNC programmer and used ALPHACAM for seven years.

“Depending on what components you’re cutting, nesting probably cuts down the time by approximately 75 percent. If you own ALPHACAM, you can save yourself a great deal of time over the course of a year.”

“It’s another tool, another machine to add to your arsenal on a day-to-day basis,” he says. “Any time you can take the tape measure out of someone’s hands, you’re saving time. I try to take as much figuring from the shop guys as possible, and put everything on the CNC that I can.”

Leenheer takes advantage of ALPHACAM’s nesting capabilities to maximize his time, his materials, and his CNC router. The nesting functionality of ALPHACAM enables programmers to have nests automatically arranged in the most efficient pattern possible.

ALPHACAM nesting cuts down significantly on time and error, as it saves shop employees the drudgery and error-prone task of designing nests by hand.

“You do away with a piece of paper and a saw when you have a thousand pieces that you are crossing off of a list,” Leenheer says. “It’s easy to draw and easy to nest. I’ve done nesting programs with 100 to 120 sheets — and, to me, that’s a lot.”

ALPHACAM’s nests are editable, which translates to greater flexibility for programmers who want to adjust nesting patterns. One of the software’s latest nesting functions offers greater customization, as it allows programmers to identifyparts by name rather than by number.

The nesting function also allows programmers to select parts from the screen or from a kit of parts, to rotate the parts to any angle, and to fix the orientation of the parts if grain direction needs to be maintained. Nesting in ALPHACAM also works for small parts and multiple-depth parts for which onion skins are required.

ALPHACAM also offers reverse-side nesting capabilities, which means that jobs that require features to be cut on both sides of a sheet can also be nested.

“Depending on what components you’re cutting, nesting probably cuts down the time by approximately 75 percent. With four hours on ALPHACAM, you can almost eliminate an entire employee,” Leenheer says. “If you own ALPHACAM, you can save yourself a great deal of time over the course of a year.”

Leenheer credits the combination of his CNC router and ALPHACAM for saving time on a multitude of complex tasks. With ALPHACAM and the V-groove tool on his CNC router, he is able to cut desks with pre-made fold miters so that he can easily fold the desks together after they’re cut.

He also takes advantage of the software’s multi-drill function, which easily and accurately programs a multi-drill block on his CNC to simultaneously drill multiple holes.

Leenheer uses the parametric constraints feature in ALPHACAM to save him the time of redrawing and reprogramming projects that are identical in design, but varied in size.

“Parametric constraints are ideal to use when you know there is a certain piece you will be required to produce multiples of, but the size slightly changes,” he says.

For example, parametric constraints, which are used to maintain the size of specified part features, can be used on circular parts in which there are holes in the center. While the circles may vary in size, the holes remain in the same place and are cut to the same size ratio.

“You can grow or shrink the size of the piece, but holes are located in the proper place,” Leenheer explains. “It saves you from having to redraw every time.”

“We have a parametric drawing where a fourth hinge is added if the door goes over eight feet,” he says. “I can just punch in three numbers and have a door frame that’s ready to cut.”

Leenheer credits ALPHACAM reseller Paul Demchuk of Vectorline for being a source of ongoing support with the software.

“Paul Demchuk is such a great guy — always so willing to help,” he says. “He’s excited about ALPHACAM. He always stands behind it and is always available to solve problems — and there aren’t a lot of problems.”

“Depending on what components you’re cutting, nesting probably cuts down the time by approximately 75 percent. If you own ALPHACAM, you can save yourself a great deal of time over the course of a year.”